I remember what it's like to be afraid of swimming alone in the sea at night in deep water far from shore; or of walking on bare feet through the dense understory of wild rainforest.  I remember because, while it may seem like I'm fearless now, there are occasional reminders!  Bravery is the end result of two properties: courage, and knowledge.  The courage is a gut curiosity that keeps you going, despite what your head tells you.  The knowledge is the truth behind the courage that supports that curious strength.  They play off each other.  I had the courage to explore the woods, then gained the knowledge about the risks of Lyme disease from tick bites and what kind of wasps sting, etc., which bolstered my courage to go deeper, darker, thicker.  To lay down among the rushes to photograph a strange spider, mite, toad, flower, or weevil.

Thus, though I was once afraid of being in a forest at night (I'm a marine biologist), I've learned more and trodden deeper, because I live here now.  One of the tidbits of knowledge I'd picked up to make romping through the New England woods easier is that, being far from the tropics, I assured myself, there were no large and lethal monster arthropods that I could run into.  Sure we've all heard of the Black Widow spider, but they are so rare!  Even whispered common name terrors like the "Brown Recluse" spider or "Water Mocassin" snake don't occur up in New England.  It is thus with great curiosity I reacted to a recent voicemail from my stepmother about a "huge yellow spider" in the backyard.  Sure, sure.  I lazily reached for my camera, thinking it would be just some curious 2-cm Salticid, or some such nonsense.  I pushed face first through the arborvitae hedges and lilac bushes bordering my parents' houses and went to check out this mystery... 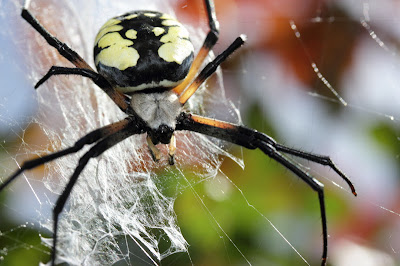 ...and sweet Nancy Sinatra, she was not kidding!!!  I realized the creature before me disagreed with everything I was previously sure of.  Resting in a web a foot off the ground, a bright black and yellow spider with a body the size of my thumb stretched legs long enough to make the palm of my hand seem small.  In Massachusetts, USA!  A region of North America where life freezes over in wintertime.  Staring at this huge yellow beast, I began to hear a steel drum playing in my head, like I was on a Caribbean island for an entomological expedition, warm breeze going by, rum drink in hand, diligently studying guidebooks with a fellow scientist to memorize the target species of the trip while getting sloshed.  (This is often how science works.) 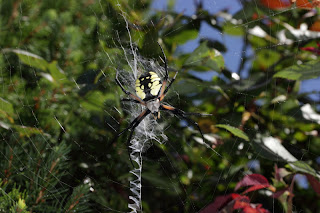 What we'd found was Argiope aurantia, or Yellow Garden Spider (around here).  It occurs throughout North America, from southern Canada southwards.  Somehow, I don't recall seeing any of the 3 inch long (with legs outstretched) adult females from my boyhood days around the yard.  Which is particularly surprising, as this female's web was right next to our swimming pool!  One cool feature of their web is the thicker bunch of zig-zagging silk in the middle, called the stabilimentum, whose debated function might be to camouflage the spider, attract prey, stabilize the web, or act as the band-aid on the glass door (i.e., to warn large animals that there is a web in the way, please do not crash through it).

My favorite thing to learn about this creature was that, when disturbed, it will rock back and forth in its web like a baby in a jolly jumper, up and down, merely by flexing its legs.  Perhaps to make itself seem larger?  Or perhaps to make it a more difficult meal to pinpoint?  Perhaps even a way to tangle up potential prey!  Their eyesight is so poor that it's likely a bet hedging scenario - a useful behavior for a range of situations.  But confusing to watch at first!  I like to think she's saying "hello."


Like many arthropods, this female will not survive the winter.  This far north, a life cycle is completed every year.  Maybe this summer isn't your best; but for many creatures, it's the only one of their life.  Enjoy it!
Posted by Noah J.D. DesRosiers at 4:32 PM 1 comment:

Noah J.D. DesRosiers
I am a freelance marine ecologist with a master's degree in marine conservation biology / reef ecology. My current project focuses on the international trade in live coral reef animals for the aquarium trade. I have lived in the USA, Australia, Saudi Arabia, Malta, and the Philippines. I am forever exploring the world's oceans to understand our relationship with them and their creatures. Feel free to send me an e-mail!